One of my journalism assignments from this semester required me to write about an event/building on campus that pertained to entertainment or arts. As you can probably tell, I love music. So I chose to write about the Hugh Hodgson School of Music, and I even got to interview one of the school’s most talented professors – Daniel Bolshoy.

The Hugh Hodgson School of Music is located on 250 River Road in the Performing Arts and Visual Complex at the University of Georgia. 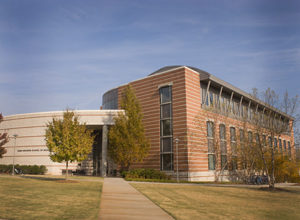 The school is named after Hugh Hodgson, who was instrumental in establishing the music program at the University of Georgia.

The Department of Fine Arts and Music was established in 1928 after Hodgson became the first music professor at the university.

Four degree programs in music were developed between 1930 and 1941, including the University of Georgia’s first graduate music degree.

The University of Georgia honored Hodgson by naming the music program and building after him in 2005. It was called the School of Music prior to 2005.

There are currently over 600 students and 65 faculty members of the Hodgson School of Music.

Daniel Bolshoy, a music professor at the Hugh Hodgson School of Music, teaches music courses such as Guitar for Beginners and Sophomore Applied Instruction.

“I discovered early that I really loved to teach even before I started teaching music,” Bolshoy said.

Some of these performances include the Fall Opera Production, the Choral Showcase and Holiday Concert Day.

Bolshoy enjoys attending different concerts and events on campus throughout the year.

“I participate in a lot of the events that happen at the Hugh Hodgson School of Music. I go to as many concerts as I can. It’s fun because I love music. It’s also nice to see my students and colleagues play,” Bolshoy said.

The Hodgson Concert Hall seats 1,100 people and is described as an “acoustical gem.”

Bolshoy enjoys the different amenities that the school offers.

“The concert halls are really nice. We have three beautiful concert halls. We have great recording equipment and nice studios,” Bolshoy said.