The University of Georgia’s Spotlight on the Arts began in 2012 as a way to showcase talented artists and students in Athens. This year, the festival boasted over 100 events and more than 23,000 people attended.

Camie Williams, a public relations coordinator for the Provost, has seen the festival grow since it first began.

“It was started as a way to highlight all of the amazing arts units that are already on campus, and give an opportunity to students to see how they can get involved,” Williams says. 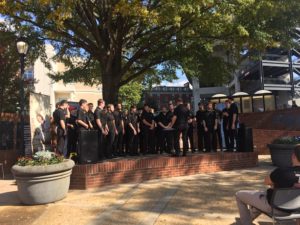 Members of the Men’s Glee Club sing during Student Spotlight

“When it began, there were about 40 events. Now there are over 100 events and exhibitions. The attendance has hit records every year since it started,” Williams says.

Diversity in the Arts

Williams also says that the university makes a conscious effort to try to showcase UGA’s diversity when planning these events.

“We have diversity on our campus and it’s great to make sure that everybody sees that as well. We have a picture of an African-American cellist on one of our posters, and a man came up to me last year and asked if we had anymore events like this, because he wants his son to see it, to see that he can do this too,” Williams says.

The Student Spotlight event took place on Nov. 2 from 10 a.m. to 4:15 p.m. on a mild, sunny day. Students and other people on campus stopped by Tate Plaza throughout the day to watch the different student performances. Members of the Black Theatrical Ensemble performed two pieces – “Fly” and “Flowers.”

Kimarah Laurent, a 21-year-old senior majoring in theatre from Loganville, Georgia, is the president of the Black Theatrical Ensemble. She performed at Student Spotlight.

Members of the Black Theatrical Ensemble perform at Student Spotlight

“For this show, we decided to do two pieces this time. Our first [performance] that you saw was ‘Flowers,’ this was our first time performing this piece. The second piece – ‘Fly’- we did for Cafe Soul,” Laurent says.

Jaquan Hutcherson, a 21-year-old entertainment and media studies major from Columbia, South Carolina, also performed at  Student Spotlight as a member of the Black Theatrical Ensemble.

“We did ‘Flowers’ for domestic abuse awareness. We wanted to show what goes on with the abuser and the victim. I’m the male counterpart, and through the back and forth between us, you can see each viewpoint,” Hutcherson says.

“Fly” was inspired largely by Nina Simone’s song “Blackbird.” Hutcherson and Laurent say that the purpose of this performance is to inspire people to break free from any entity that is holding them back. For the second part of the performance – “Fly”- Hutcherson came up with the idea to use a chain as a prop.

“Trying to break free- that’s really a big theme of the piece. By the end, we drop the chains, because we realize that all of the power is within us,” Hutcherson says.

Room for Improvement
Hutcherson and Laurent know about life as UGA students interested in the arts. Hutcherson thinks that the university could do a better job advertising different art showcases and performances.

“We get these emails about football games each week, but why don’t we get anything about art performances?” Hutcherson says.

Laurent believes that UGA could do a better job at promoting its diverse students in the arts.

“I feel like, yes, there is an effort to promote diversity, but there’s always something more that can be done. I feel like we do still have to work on that as a school, and hopefully, sooner than later,”  Laurent says. 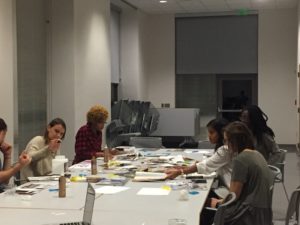 UGA students do arts and crafts during Student Night

Becca Gross is a third-year art history major from Columbus, Georgia. She hosted the Student Night event at the Lamar Dodd School of Art on Nov. 9. Gross has ideas about how Spotlight on the Arts could be improved.

“There’s a lot going on that people don’t know about. If I could improve Spotlight on the Arts, I would make it longer and more frequent,” Gross says. 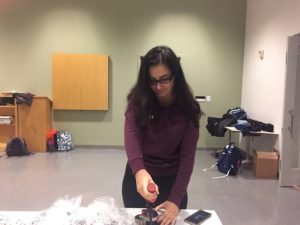 A UGA student makes a button during Student Night

Sebastien Nazaire is a third-year computer science major from Kennesaw, Georgia. He performed with the a capella group, the Ecotones, at  Student Spotlight.

As a third-year student, Nazaire has seen Spotlight on the Arts grow while he’s been at UGA.

“It’s definitely highlighting a lot of the groups on campus and giving each group their time to shine. The list of groups that are being showcased just gets larger each year,” Nazaire says.

Participation in this year’s events was similar to 2016. Planning has already begun for next year, and the date has been set for Nov. 1-12.