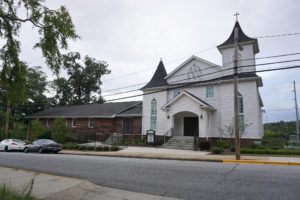 On a stormy Thursday evening, students, parents and volunteers crowd into Oconee Street Methodist Church despite the dreary weather. The weekly meeting of U-Lead cannot be missed. People greet each other and eat dinner that was prepared by volunteers.  In a short amount of time, U-Lead has become a staple for many local students who need help with homework, college applications, essays and college scholarships.

“What’s your essay about?” a University of Georgia student asks to a high school senior. The student needs help writing an essay for her AP Literature class, and she has a strong case of senioritis. The high school student laments that the novel is confusing, and that she doesn’t know how she should structure the essay. For the next hour and a half, she will receive help from three different volunteers. The volunteers, although they have not read the book, work to help her structure the essay. After an hour and a half, the student has written three paragraphs and feels more confident about completing the essay.

U-Lead was founded in 2014, with the focus on helping undocumented students pursue higher education. Since its inception, the organization has dedicated time to activities such as tutoring, preparing for the ACT and SAT, applying for college and renewing Deferred Action for Childhood Arrivals (or DACA) applications. DACA is a federal program that gives immigrant youth the opportunity to obtain a work permit and protection from deportation under certain conditions. The Trump administration announced last year that it intends to phase out the program.

Betina Kaplan, a Spanish professor at the University of Georgia, is one of the co-founders of U-Lead.

“We met with a few students, and they told us that what they needed the most was one-on-one advising, looking into all the materials they had and helping them will all the steps of applying to college,” Kaplan said.

The nonprofit started off small, but immediately, Kaplan knew that it had the potential to change young people’s lives for the better. Before U-Lead, Kaplan’s position at the university caused her to feel conflicted. She was teaching at one of the four colleges in the state of Georgia that bans all undocumented students. She felt stressed and even contemplated quitting teaching. Now that she is helping to run U-Lead, she feels at ease teaching at the university.

“I feel more comfortable being at UGA because I am doing this other side work with a population that matters a lot to me,” Kaplan said. “I like to think that all those projects made me a better teacher at UGA because I am more student-centered now than I was before.”

According to the Migration Policy Institute, there are approximately 59,000 undocumented people in Georgia aged 16 to 24. After high school, many undocumented students are faced with making tough decisions about whether college is a viable option for them. Most undocumented students choose not to go to college because of the incredibly high tuitions, and many that do enroll end up dropping out.

U-Lead seeks to encourage these youth to go to college and searches for ways to make college more affordable. Scholarships are key. The nonprofit participates in different fundraisers year-round and constantly applies for scholarships. It has received grants in the past as well. In 2017, U-Lead helped send over 42 Athens-area students to college. These students received over $130,000 in scholarship funds.

Elizbeth Sanchez, from Elberton, Georgia, is a current college student whose life has changed by getting involved with U-Lead.

“I heard about U-Lead when I graduated from high school. I went one semester to Athens Technical College where I was dual-enrolled all my senior year, but due to my immigration status, I was unable to pay in-state tuition, so I had to pay international tuition,” Sanchez said.

Sanchez was panicking about how to pay her college expenses. She had received a few scholarships during her senior year of high school, but they were not nearly enough. She ended up using all of these funds for a single course while enrolled at Athens Technical College. Frustrated, she visited the college’s financial aid office for help. While at the office, a worker told her about U-Lead and suggested her to contact the nonprofit for extra help. With her parents’ support, she attended her first U-Lead meeting and kept going back.

“After I started coming, they told me about this scholarship – The Dream.US. And the Dream.US was a really huge scholarship that I did not believe was going to be awarded to me,” Sanchez said.

Thanks to U-Lead’s guidance, she received the scholarship and was able to enroll at Christian Brothers University where she is studying biomedical science. She hopes to enter the medical field upon graduation.

U-Lead is a volunteer-drive organization. Each week, volunteers prepare dinner for attendees in addition to helping with school-related activities. A sizable number of these volunteers are University of Georgia students.

Chelsea Cary is a fourth-year environmental health science major at the university. She attended her first U-Lead meeting in the fall of 2017 after hearing about it from a college friend, and has been involved ever since.

“I specifically work with the kids that are either in eighth grade or younger and a lot of what we do with them is try to get them to start thinking about college and to start trying to get them to understand that going to college is possible for them,” Cary said.

Cary is proud to be involved with U-Lead and says it has been life-changing in many ways. She has developed a tight bond with the students and cites them as inspiration.

“My favorite part about being involved in U-Lead is just hearing the kids’ stories because they don’t all have the same experiences. For a lot of them, they’re documented, but their parents aren’t. Then you have a mixed-status household and that’s really interested. Some kids don’t even speak much English, but they’re making it through school. They’re making it work. It’s just really interesting and inspiring to see,” Cary said.

Katie Lynch is a fourth-year public relations and Spanish major at the University of Georgia. She credits the leaders of U-Lead for much of its success.

U-Lead has strong support in the community. Many who are not members of the organization still support by donating, attending events and spreading the word about its purpose.

U-Lead has garnered strong support in Athens since its inception, even from non-members. Non-members support by attending events and donating money, school supplies and books. This support has played a key role in U-Lead’s success and is helping the organization grow and reach more people.

Aida Quinones is a librarian at Pinewoods Library in Athens. The library is located in a trailer and caters to Hispanic residents. The library is popular among the Spanish-Speaking community and offers educational programs, nutrition classes and community gardening among other things. Quinones has seen U-Lead grow over the past four years and is proud of its growth. She plays an important role in the lives of many local Spanish-speaking residents and knows first-hand how important the nonprofit is to the community.

“I personally have known some of these young adults through all their lives as a former Clarke County employee. The fact that U-Lead gave them opportunities to accomplish the ‘unimaginable’ – going to college – has been beyond their dreams. They are extremely grateful to have this chance to further their education. Their parents have expressed, with tears in their eyes, how grateful they are of the fact that  U-Lead helped their children attend college for free. These students and their parents are eternally grateful of such an opportunity,” Quinones said via email.

“My biggest plan would be that U-Lead ceases to exist. That means that schools get better advising and the ban against undocumented students stop, but I know that it’s quite unrealistic,” Kaplan said. “We’re hoping we continue to grow and to engage more people helping with the students but also helping reverting these horrible policies, and also getting funding for students.”